We often hear that America spends an exorbitant amount of money on healthcare, but people rarely stop to think how much it is or what that means. In 2011, the United States spent 17.9% of its GDP (over $2.6 trillion) on healthcare.

That number is insane.

To give it some context, our peers in the 18% range are Liberia and Sierra Leone. In the 10-11% range are countries like France, Canada, Denmark, Germany, Switzerland, Austria, Portugal and New Zealand. Down closer to 7-8% are Uruguay, Croatia, Hungary, Chile, Cyprus, Bulgaria, Vietnam, Poland, and Turkey. Between 3-5% are countries including Singapore, Sri Lanka, United Arab Emirates, Algeria, India, and Thailand.

We spend about $8,800 per citizen, which is surpassed only by Switzerland, Norway, Luxembourg (which all have higher per capital incomes), and is more than double what most of the developed world spends.

This is a graph I constructed with data I pulled from worldbank.org, plotting life expectancy at birth against a country's healthcare expenditure as a percentage of GDP. Why is the United States sitting at the intersection of the developed world and Liberia and Sierra Leone? 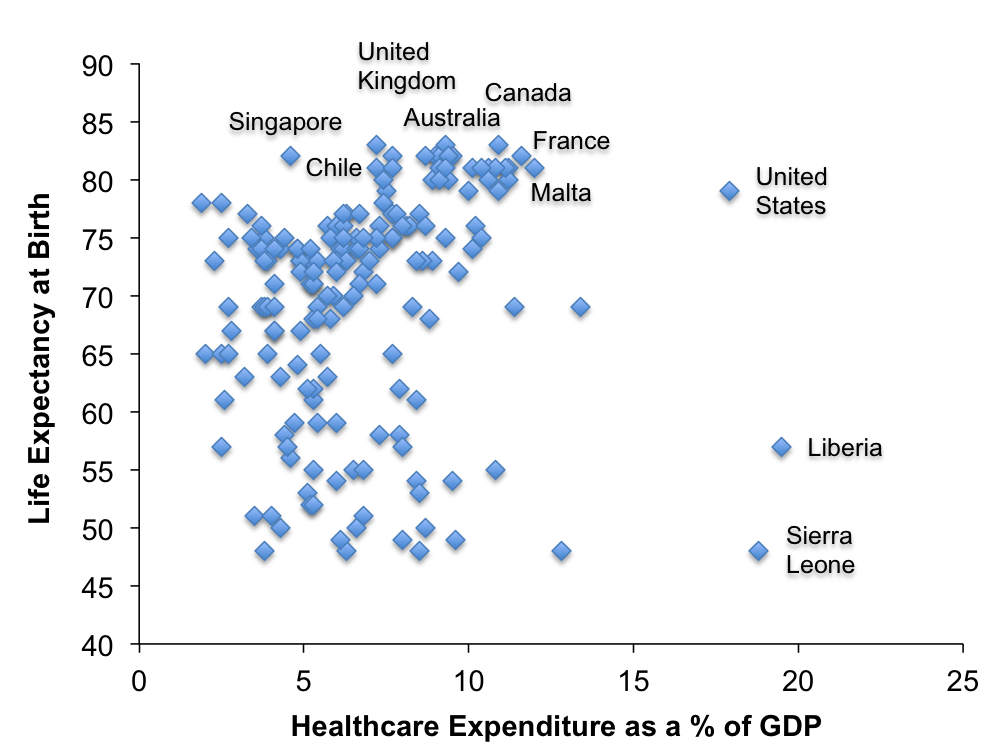 What this graph doesn't show is that these costs are running away. We spent 17.9% in 2011 compared to 16.6% in 2008, and all experts predict this number will continue growing.

Obviously, life expectancy is a rough indicator of the effectiveness of a healthcare system and there are a lot of conflating factors. But you'd expect this most basic goal of healthcare - keeping people alive - to improve with higher expenditure.

Moral hazard is a huge part of the problem; the third-party payer system is crippling our economy. When medical bills are footed by insurance companies the pricing system gets completely out of whack.

Drug companies charge $50,000 for a single chemotherapy treatment, an IV drip whose cost is defended by years of research and development.  An MRI in the US can cost anywhere between two and eight thousand (good luck finding out exactly how much) - in France, by comparison, it costs a few hundred.

A single-party payer system, or more pejoratively, "nationalized healthcare", has drawbacks. For example, wait times for elective treatment go up (just ask a disgruntled Canadian), and the government has to become integrally involved, which Americans tend to react negatively to (despite the fact that the data says it's better in almost all dimensions).

But the truth is that there's good reason for healthcare to be nationalized. I'm no great liberal; I am all for taxing cigarette smoking, motorcycle driving, and maybe even obesity. But why do people not see that healthcare is one of the few areas that makes sense - theoretical, academic, and practical sense - to have a highly involved government?

Healthcare is an inherently irrational market, where patients routinely act based on emotions rather than logic, and where the costs of decisions made by one person fall on someone else's shoulders. Externalities run high, payoffs and outcomes are unclear at best, and the philosophical backdrop for the whole system is closer to liberty than to capitalism. Everything about my economics degree tells me this is the textbook entry point for government.

Aside from the system itself, the worst offenders are probably insurance and pharmaceutical companies. But doctors are not without blame either. Hospitalized patients feel incredibly price inelastic (since the money doesn't come out of their pocket) and will pay for basically whatever their doctor recommends. Even the best-intentioned doctors may tend to recommend treatments that are more expensive and will give them a bigger payout, especially if they think that treatment is marginally more effective (and not all doctors have the best intentions).

Despite our obscene healthcare expenditure, almost 50 million Americans still don't have health insurance. Why do we have the general understanding that free speech, gay marriage, and social equality are part of a civilized and compassionate society, but somehow universal healthcare is not? We all agree that everyone has the right to food, water, and air; why do we draw the line before basic medicine and healthcare? As a worldview, I think it's barbaric.

And why are we still on a system where healthcare is tied to employment? This is a 70 year old mechanism that was installed during World War II to avoid regulations on wages and prices. This worked well back then, when employees stayed at one company for decades or life. Today's average American changes jobs a dozen times over a career, and so tethering healthcare to employment makes little sense. When Americans lose their jobs, they and their families are taken out of the healthcare system, which becomes a complete mess when they have preexisting conditions (although Obamacare is slated to fix this).

What can be done?

At this point you can probably guess that I support nationalized healthcare, but I recognize that that won't happen. There are too many people in positions of authority that are incentivized to block this change. Even more difficult to overcome is the national sentiment of "this is America where we work to buy our own healthcare, leave socialism to those lazy Canadians." These self-described capitalists apparently refuse to look at healthcare data in the rest of the world.


We can still make meaningful changes within the system. We can figure out how to align incentives so doctors and drug companies aren't incentivized to over-treat patients (or, more sinister, prevent the cure of profitable diseases). We can address the tricky problems with end of life care, which drain hundred of billions of dollars per year to keep many patients miserable and bed-ridden. We can change regulations for pharmaceutical companies, create clearer pricing schemes at hospitals, and reduce friction throughout payment systems. America's obesity is clearly a huge part of the problem, but regulating calorie consumption doesn't go over well (thanks for trying Mayor Bloomberg).

I also think there are new innovations on the way that could dramatically change healthcare costs. Real-time blood monitoring, where an implant in your bloodstream could send a notification to your iPhone when something was wrong, promises to reinvent preventative medicine (which admittedly has its own set of problems). Software technology companies are in the process of streamlining and automating healthcare systems, which will save billions.

Right now, I think the most important thing we can do is begin a cultural shift to make people care about the problem of healthcare expenditure, which begins by articulating the issues. It's lucky that we live in a country where popular consensus dictates policy, but it's a shame that Americans don't know enough to fight for substantive changes.